Will Home Made Spindle Washers Cause Run Out?

If you've been woodturning for awhile and use scroll chucks then you've probably had a chuck that seized on the threads and is difficult to remove. Grease or oil will not prevent stuck chuck but there are anti-seize compounds based on copper or graphite that can help. Another way is a plastic washer, called a spindle washer, that prevents the chuck from getting super tight. These washers can be purchased commercially or made in the shop.

I tend to pack rat jars and containers for various uses. One day a plastic jar lid caught my eye and I decided to make a spindle washer. After some experimentation I found that larger, thicker, lids like those from peanut butter, peanuts, mayonnaise, etc. made better washers. Pass on any lids with writing or other decoration. My method is simple, drill a 1" hole in the center of the lid (use whatever size matches your spindle), mount it on the lathe held in place with a faceplate or chuck and use a parting tool to remove the outside rim. It doesn't have to be perfect. You can make them any size you want. Most of the time I can remove a chuck using only my hand, occasionally after a long turning session I need a little leverage but the washer still prevents the chuck from seizing up tight.


A common concern is that plastic lids are not made with any precision and will cause excessive run-out which expresses itself as vibration. I decided to test a homemade spindle washer and find out how much runout it introduced.

First I measured a washer using an iGaging digital caliper accurate to 0.001" and with a resolution of 0.0005". Now I don't remember from what kind of lid this washer was made, I've had it for more than a year. But measuring various points around the washer, the deviation was never more than 0.0005" so the total variation is withing 0.001" which I found quite impressive. 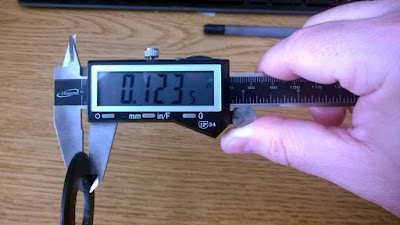 Next I chucked the largest Forstner bit I own into my Nova G3 and tested runout using a dial indicator against the shank. The results were surprising. The very first test was after turning a handle for a beater chisel and I did not clean the threads beforehand, consequently it had the greatest runout of any test. Really, that test should be thrown out but I included it. The three remaining tests were done with clean threads.

The runout will be magnified as you move away from the center so if my test piece were 2" in diameter, the measured runout would be approximately doubled. Testing shows the washers introduce some runout but less than what the chuck itself introduces. So claims they introduce wobble are valid, however; the chuck introduces even more wobble so how much is acceptable to you. At the end of the day these are wood lathes and I'm not attempting to make precision parts so for me the washer is an acceptable trade off.
Posted by Wood Knack at 4:22 PM No comments: