A cumaru and padauk urn in a modernist style. 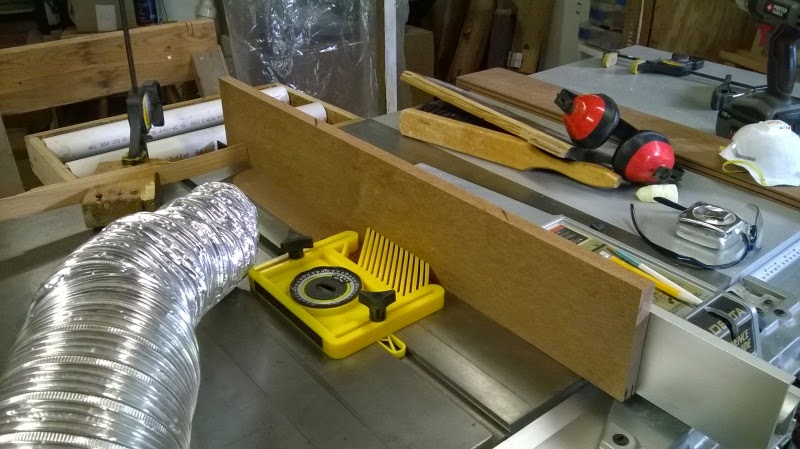 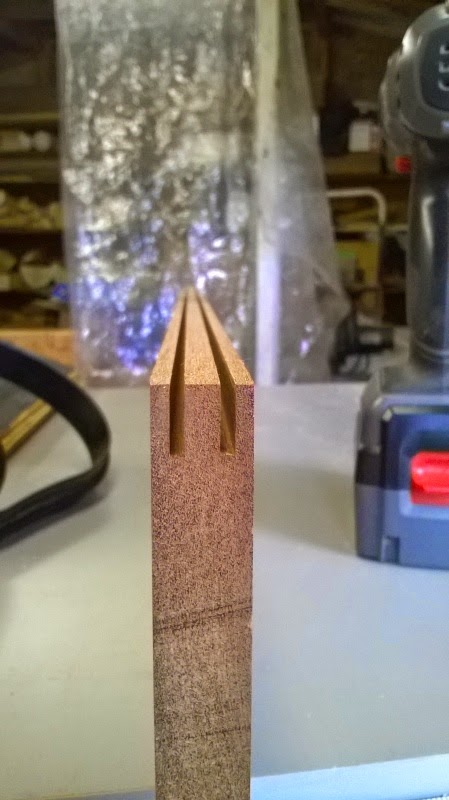 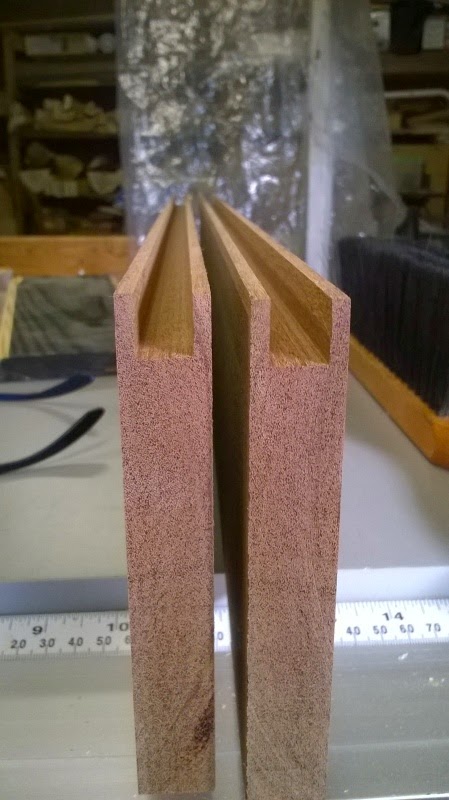 I joined two cumaru boards with a visible padauk spline. Never having seen this done I was a little concerned but in theory it should work fine in a box since adjacent sides will support one another. To make the groove I set the fence a tick over 1/8" from the blade and ripped two cuts on either side then reset the fence and removed the center. 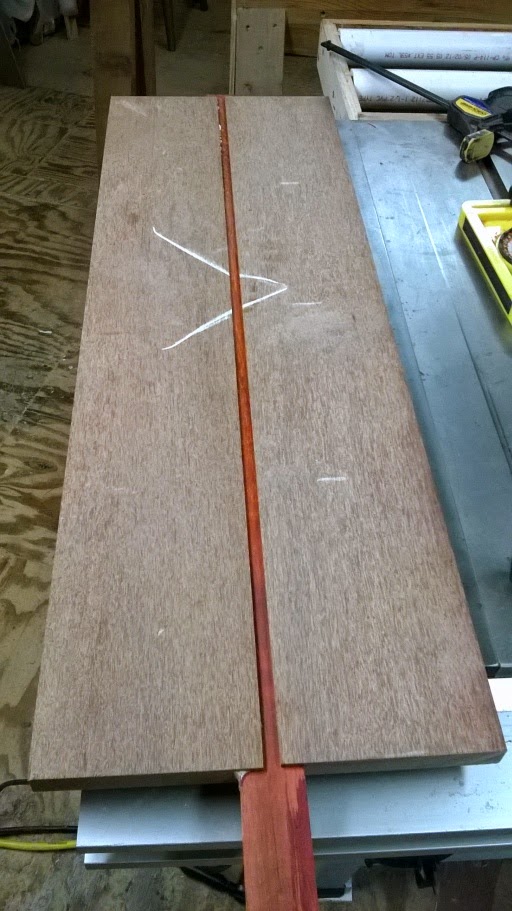 The miters were cut on the table saw. (no pics)

My ratchet straps disappeared during shop renovations so I built this simple jig using wedges to clamp the bottom. It worked well. The miter joints have biscuits to prevent sliding around. What appears to be a snake shaped dent in the upper right corner below, is actually an unusual grain pattern, an optical illusion. 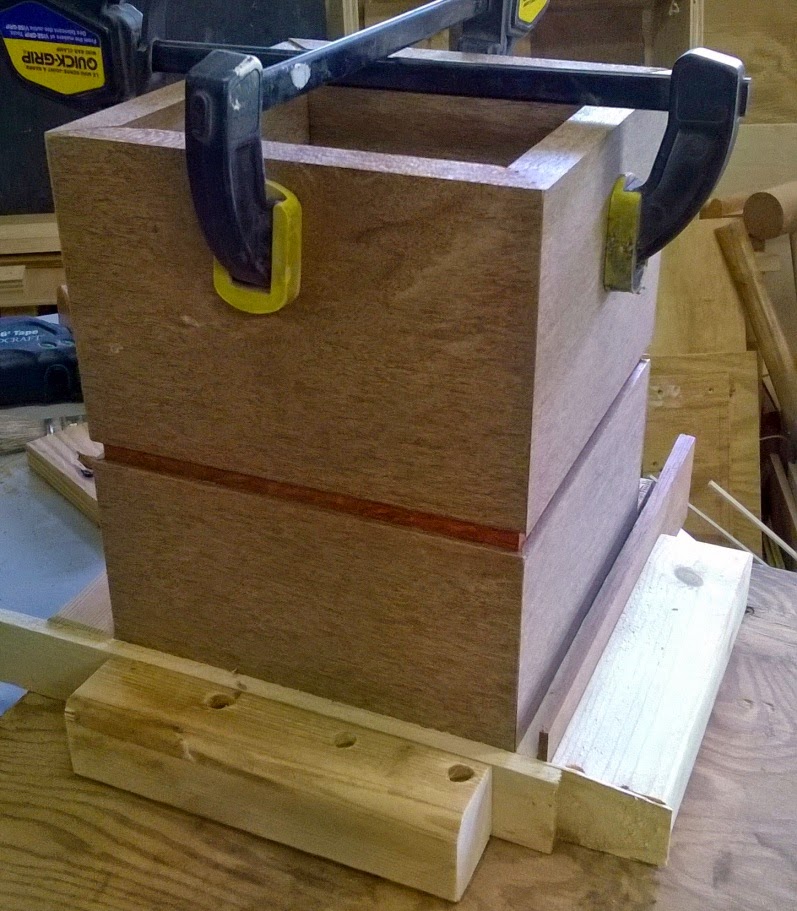 After taping the edges of 3/8" plywood squares, I inserted them into the inside groove to keep pieces aligned during glue up. Happily it worked. 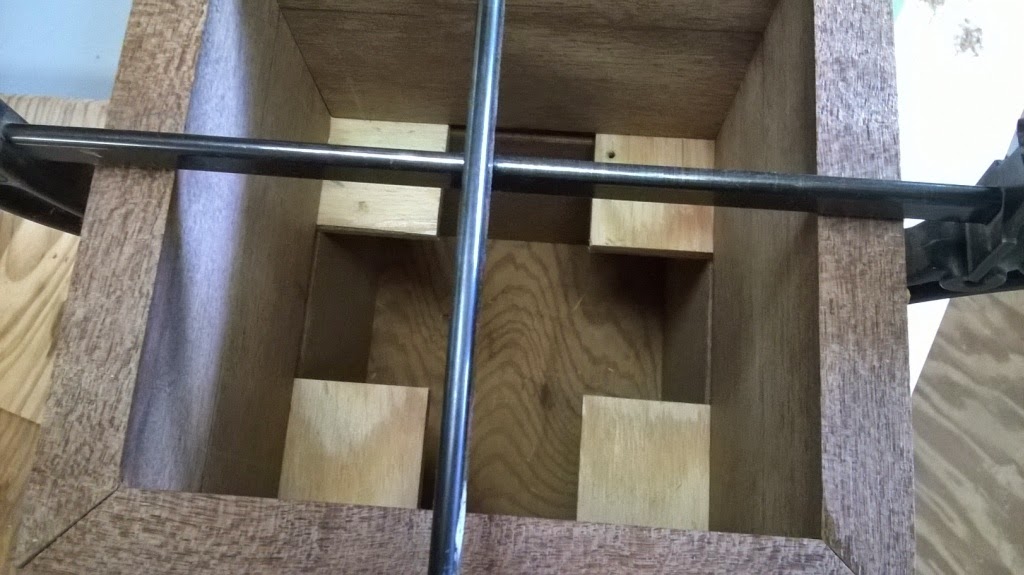 The same jig came in handy for gluing the padauk frame. Tape on the corners keep the miters aligned perfectly. This frame will overlap the inside and support the cumaru cap. 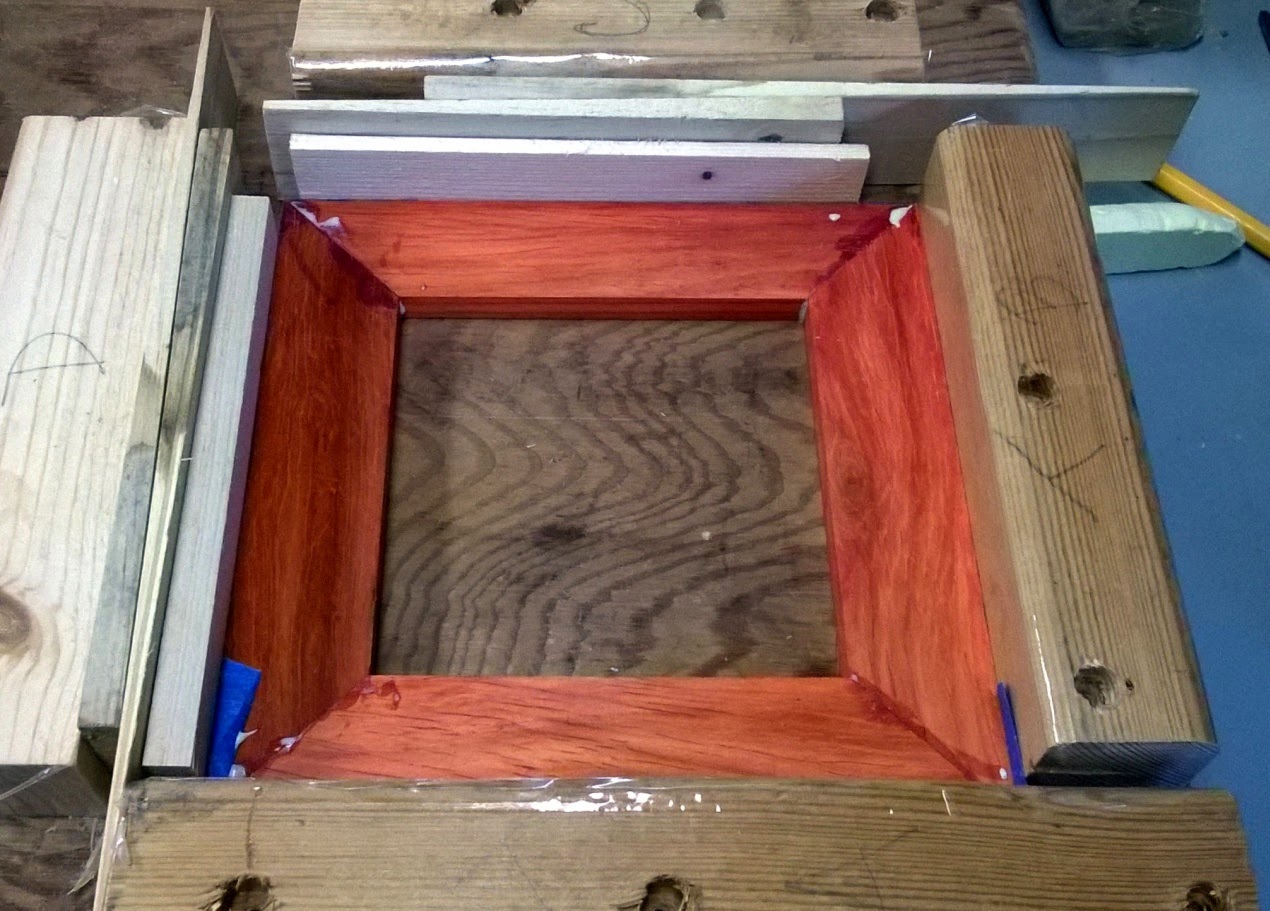 The cumaru cap will float freely inside the frame and is attached with a screw to an inside dust seal made from 1/2" lauan plywood. 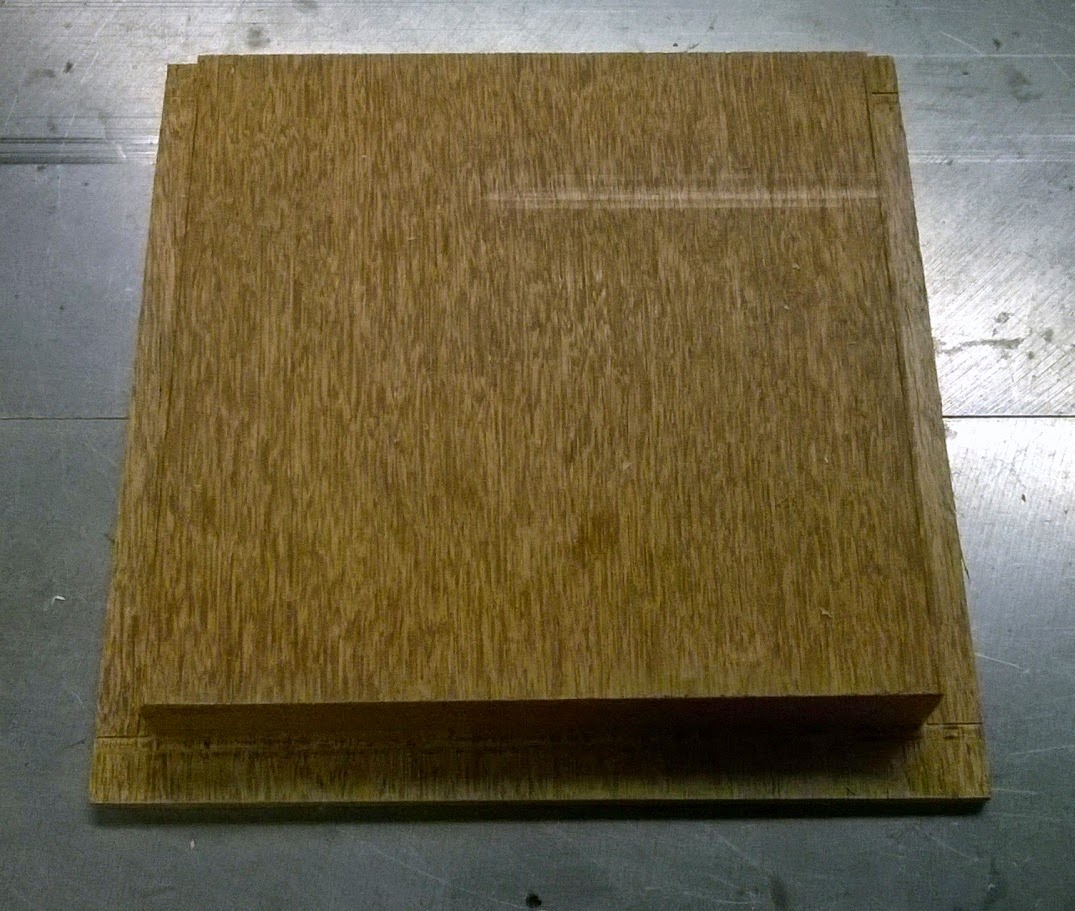 Mostly assembled, awaiting the bottom. Here you get an idea of the final monolithic shape, to my eye it's stalwart, masculine. If you've never worked with cumaru, it's very hard but brittle and splintery. Like the board is made from millions of 1/16" long splinters (looks that way too) and I was constantly picking them out of my hands and repairing spots where bits of grain would break off the edges. A block plane or piece of sandpaper to (carefully) chamfer the edges is your friend. 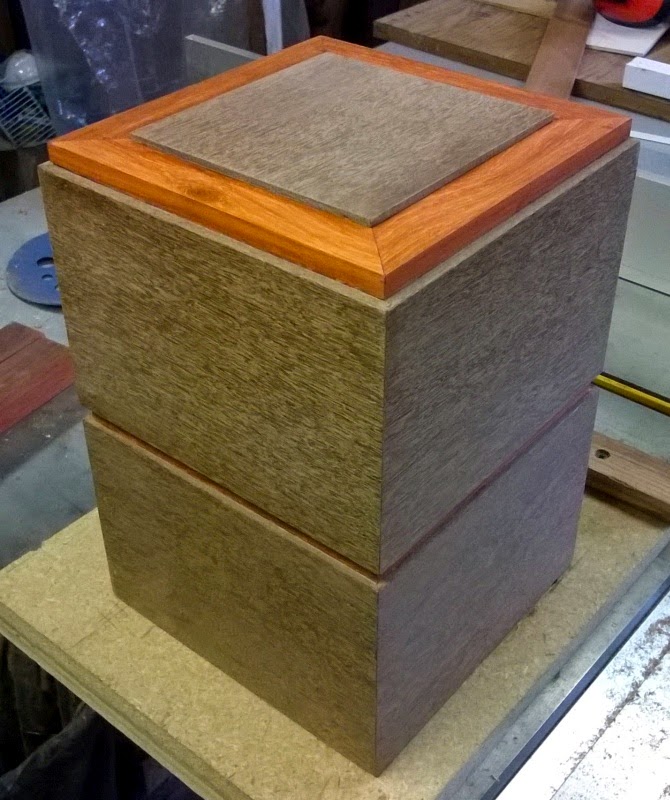 The feet are made from 5/8" thick padauk. The legs are assembled by first gluing the butt joints, then reinforced with 3/16" maple dowels, the angles cut on the miter saw using a jig, and finally the dowel ends are colored with a shop made dye made from soaking padauk chips in lacquer thinner. After sanding, the feet will be glued in place. Two poplar cleats are glued to the sides for fastening the bottom lid. 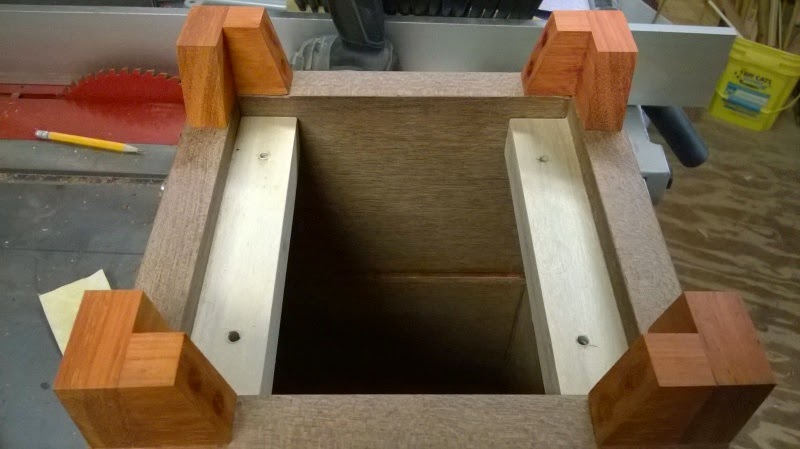 Finish is oil and wax. 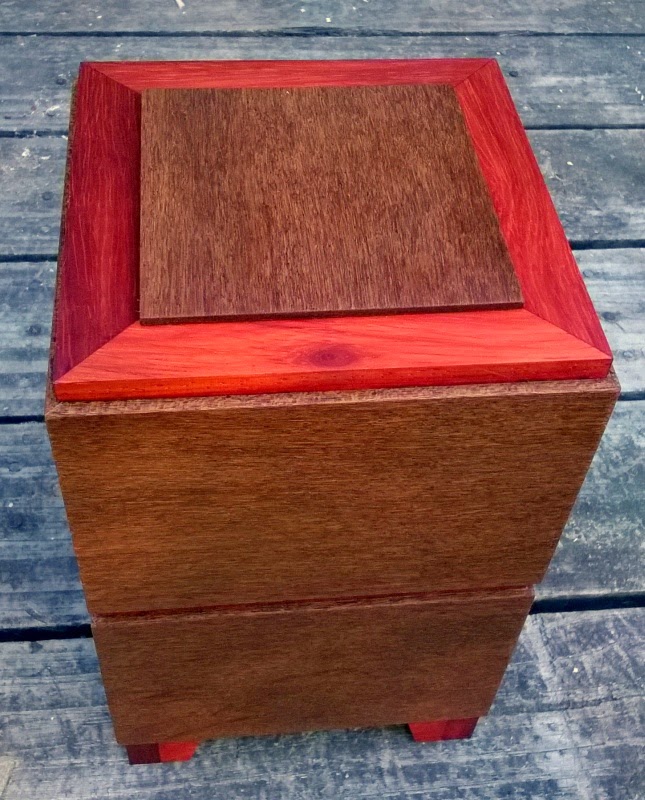 Final size is about 11.25" tall including feet, and 7" wide. Very close to the Golden Ratio by pure coincidence, I didn't plan it that way. Volume is approximately 250 cubic inches. 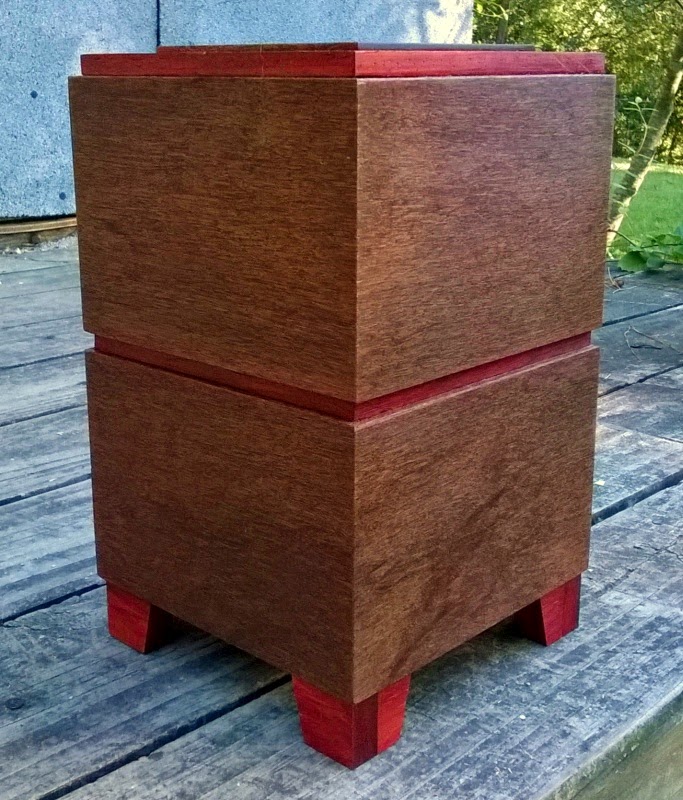 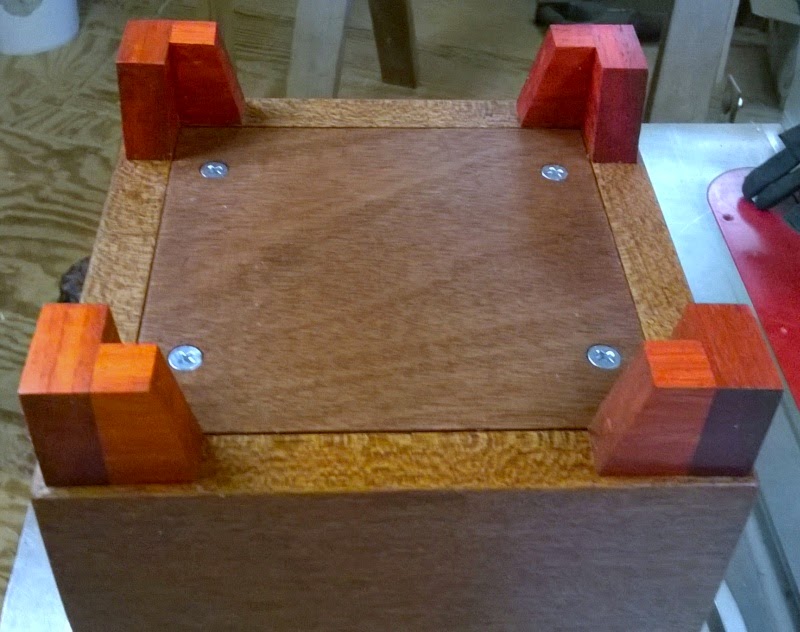 Thanks for reading my blog.

Posted by Wood Knack at 1:17 PM No comments:

This green grinder, no maker mark, was my first, an average but decent quality crank grinder. After a short period I sold it and bought the GP and Prairie grinders. The gear ratio was 9:1. Looks very similar to common 1929 grinder below (red) but is of better quality. 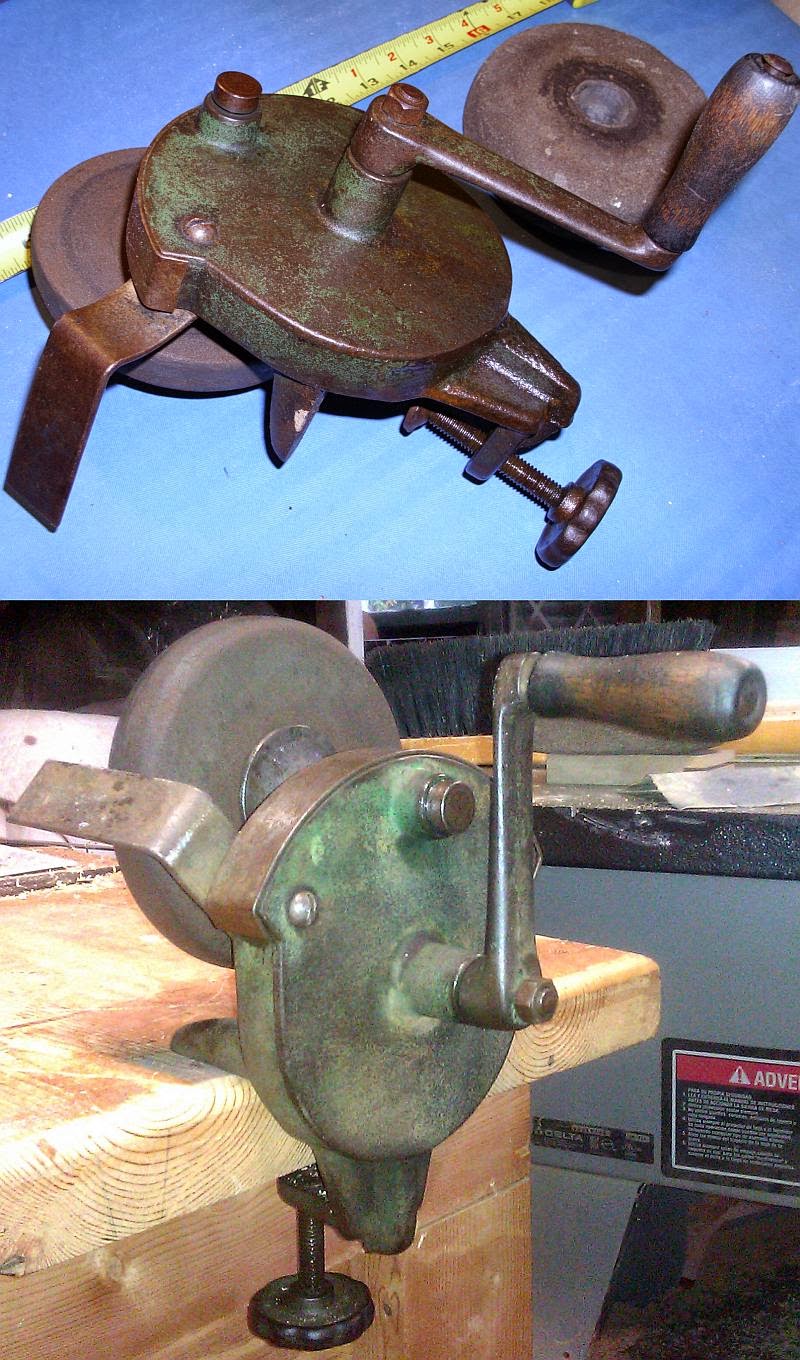 An infamous Dec 29th, 1929 grinder in bright red. A freebie that came with the GP grinder.  If you've been around grinders much you'll know these are common as fleas on a fox. Judging by the wheel it got a lot of use but unfortunately there is no simple way to secure the arbor from turning as you try to loosen the arbor nut. Gear ratio is the common 9:1 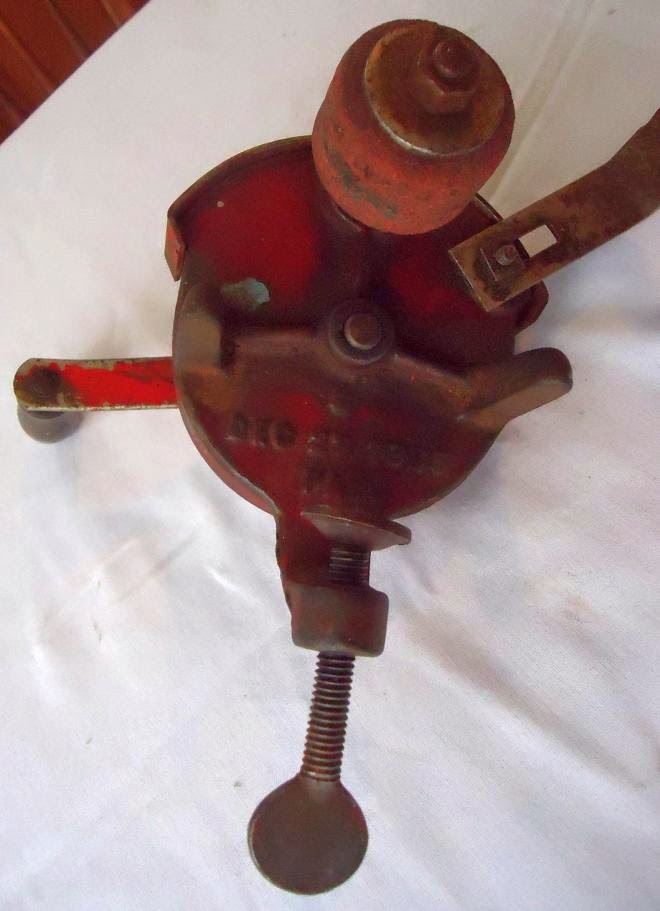 Posted by Wood Knack at 2:00 PM No comments:

Email ThisBlogThis!Share to TwitterShare to FacebookShare to Pinterest
Labels: grinder

Model 85 grinder from Prairie Tool Co., Prairie du Chien, WI.; made sometime after 1920. The 15:1 gear ratio = 900 RPM at one crank per second. Slightly less beefy than the Goodell Pratt but still a heavy duty and quality built grinder. Unfortunately mine is missing the tool post.

Before and after videos:

Posted by Wood Knack at 2:00 PM No comments: 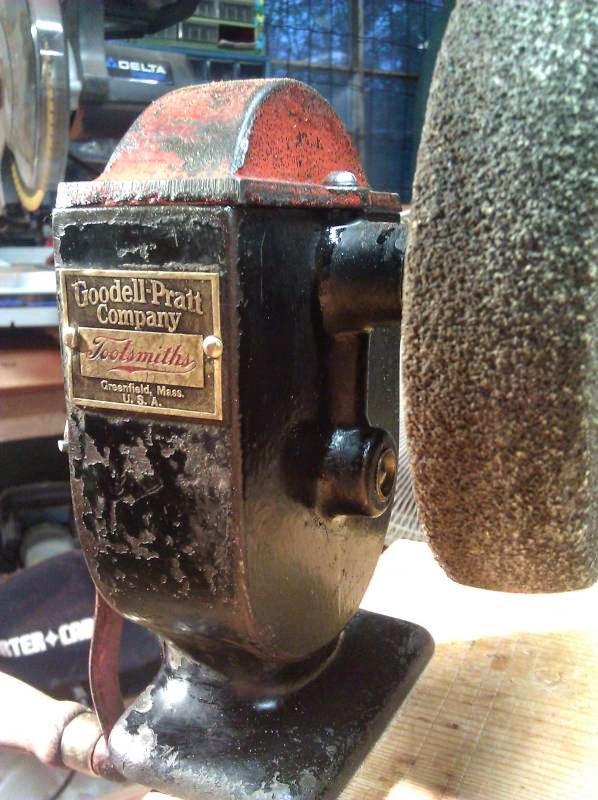 Compared to most crank grinders, the 485 is massive at 11 lbs. but was the baby in the Goodell Pratt family of grinders. The 22:1 gear ratio spins the the wheel at over 1300 RPM with a leisurely 1 crank per second. The gears are beefy and run smooth. This is a high quality crank grinder, as good as you will find. 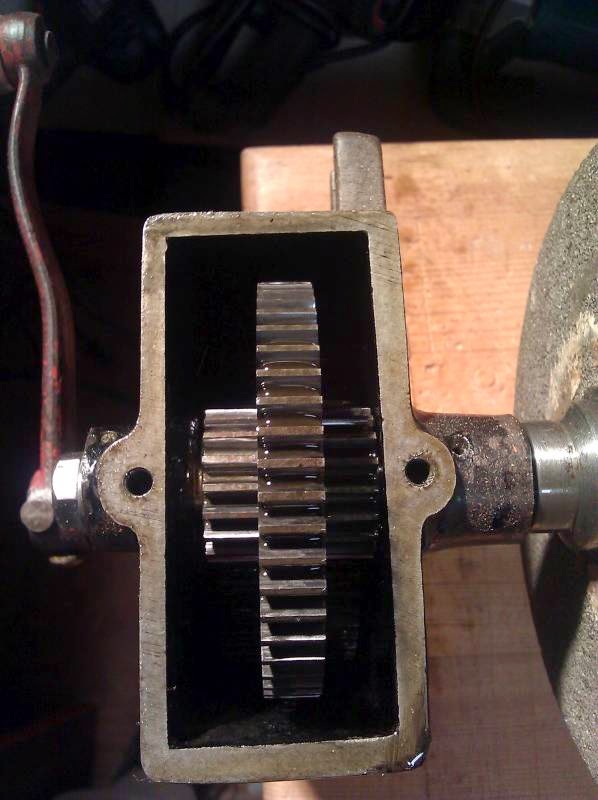 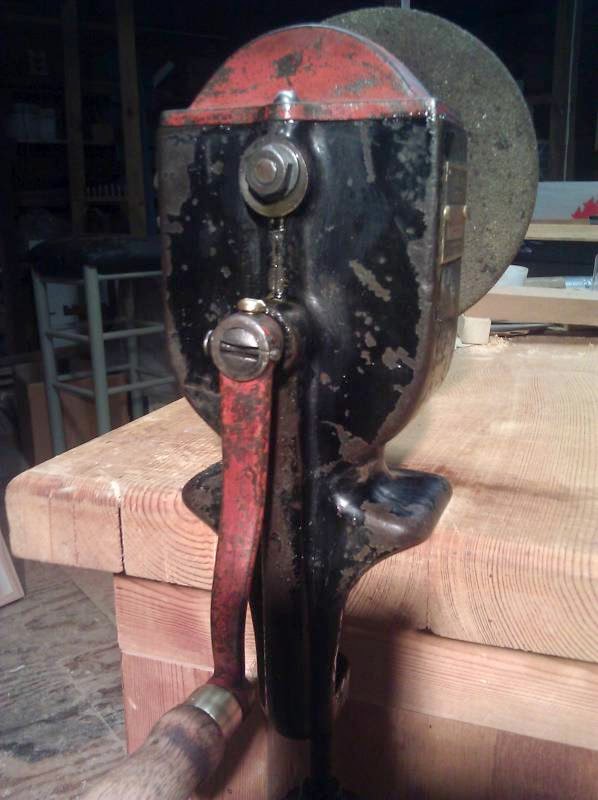 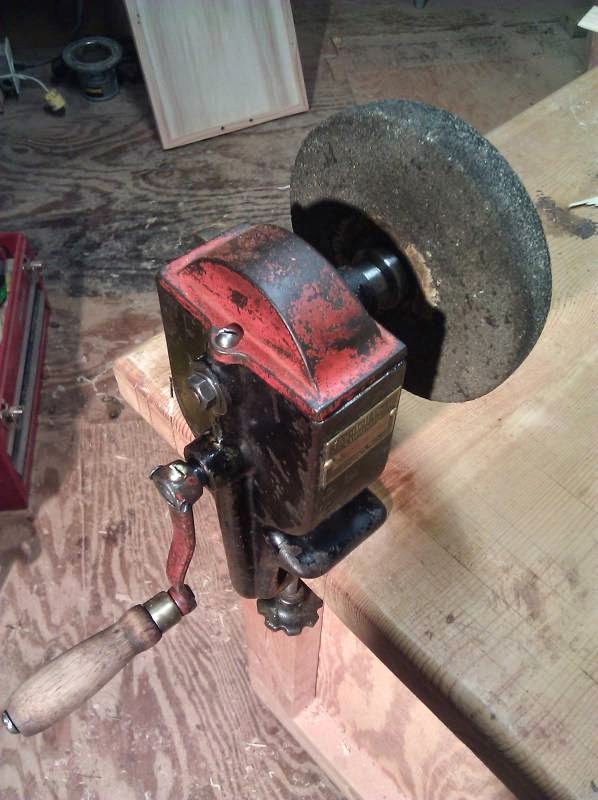 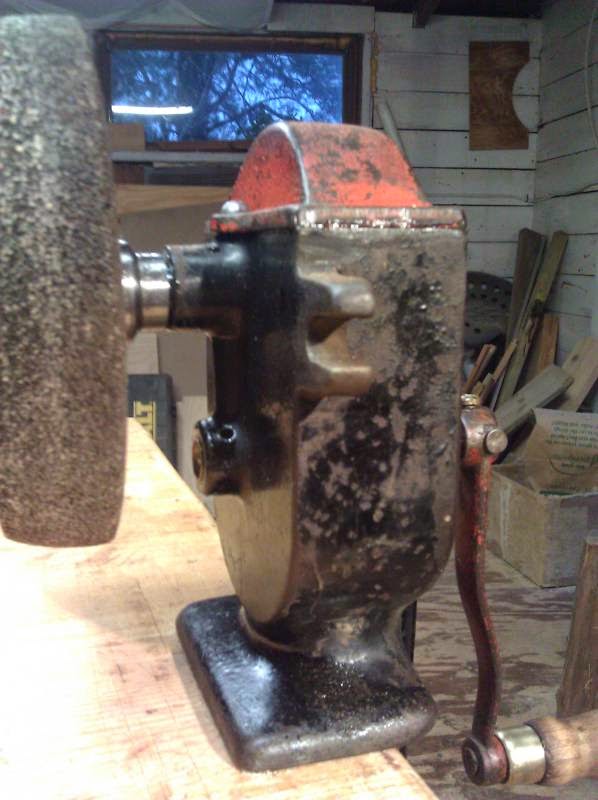