Before jumping in I have to make it clear that horns are not amplifiers. If I don't, I'll get a bunch of messages enlightening me. But horns do make sound louder and when paired with cell phones are commonly called "passive amps", and even though that is a misnomer what else should we call them? "Phone horn" doesn't have a nice ring. "Impedance matching device for mobile audio electronics" sounds like the title of a patent application. What's the big deal and what's the difference between an amplifier and a horn? An amplifier adds energy to the system, it makes the speaker vibrate harder, moving more air, and increases sound output. Horns are different, they make speakers louder by making transfer from the relatively dense speaker to the relatively rare atmosphere more efficient. Sound travels easier through dense substances like water and less easy through gasses like air. The horn helps the sound energy transfer from one to the other and the result is louder music. If you'd like to hear a smart person explain it, click HERE. 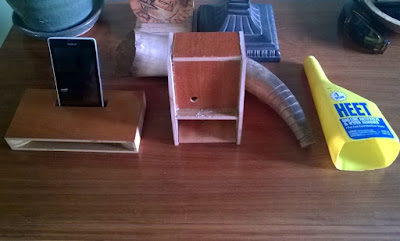 My first ever "horn" was a piece of PVC pipe with a slot in the middle for my phone and the ends cut at an angle toward the listener. It sat on two feet to prevent it from rolling around. It worked "okay". I don't own it anymore and can't find a picture but you may have seen similar speaker stands, maybe with bamboo.

My second (and real) horn which I'm calling 1.0 is based on a design by Dustin Penner. What Dustin brought to the table is a easy to make flat horn from 3 pieces of wood. I made it smaller and changed the curves slightly but overall the result is impressive.

Horn 2.0 is based on a folded horn design by MXX on Instructables. This style of horn is usually seen on bass heavy concert speakers and definitely has a warmer but slightly muddier, sound. The downside is this speaker is much more difficult to build than Penner's.


Horn 3.0 is a folded version of v. 1.0. If you are unfamiliar with folded horns, just imagine a trumpet with all it's turns. A horn doesn't need to be straight. 3.0 is much louder than the two previous versions. In my test, it was 12-14 decibels louder than the previous horn designs but the sound is also a bit harsh. To me it sounds like the small transistor radios that were popular in the 60's and 70's. 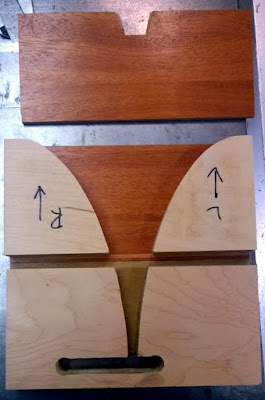 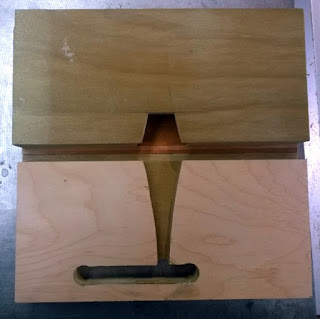 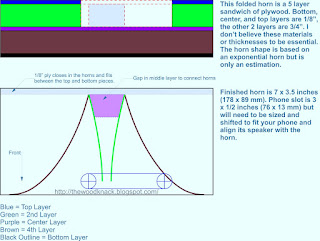 Posted by Wood Knack at 4:10 PM No comments: