My shop is 16×20 which sounds like a decent size except only about half is usable for woodworking, the other half is storage, lumber, etc.

Here is how I started the week. 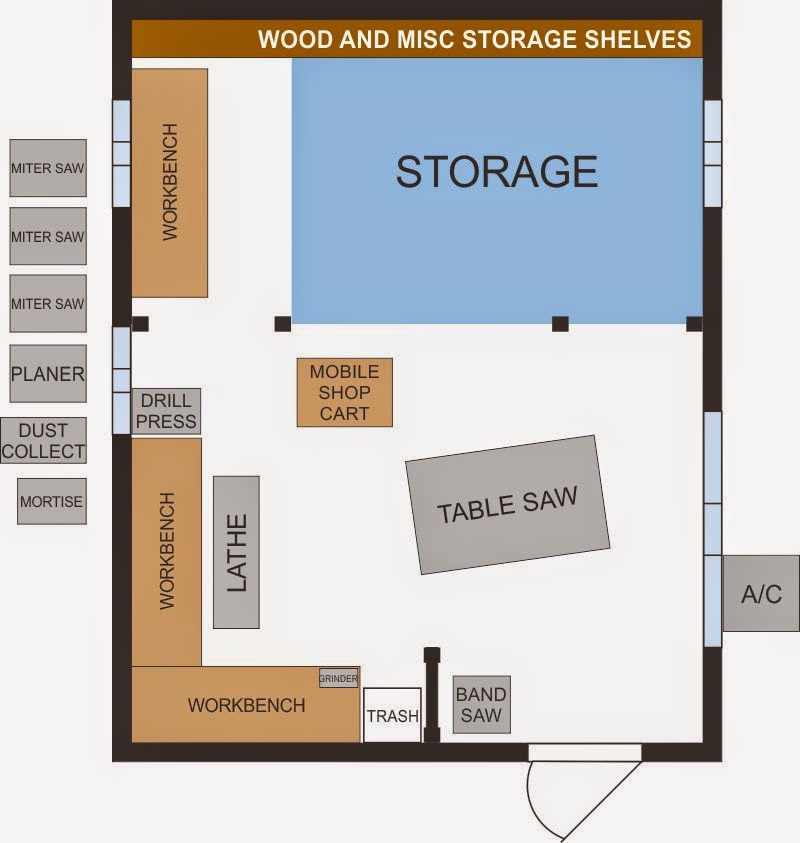 This is where I’m at. 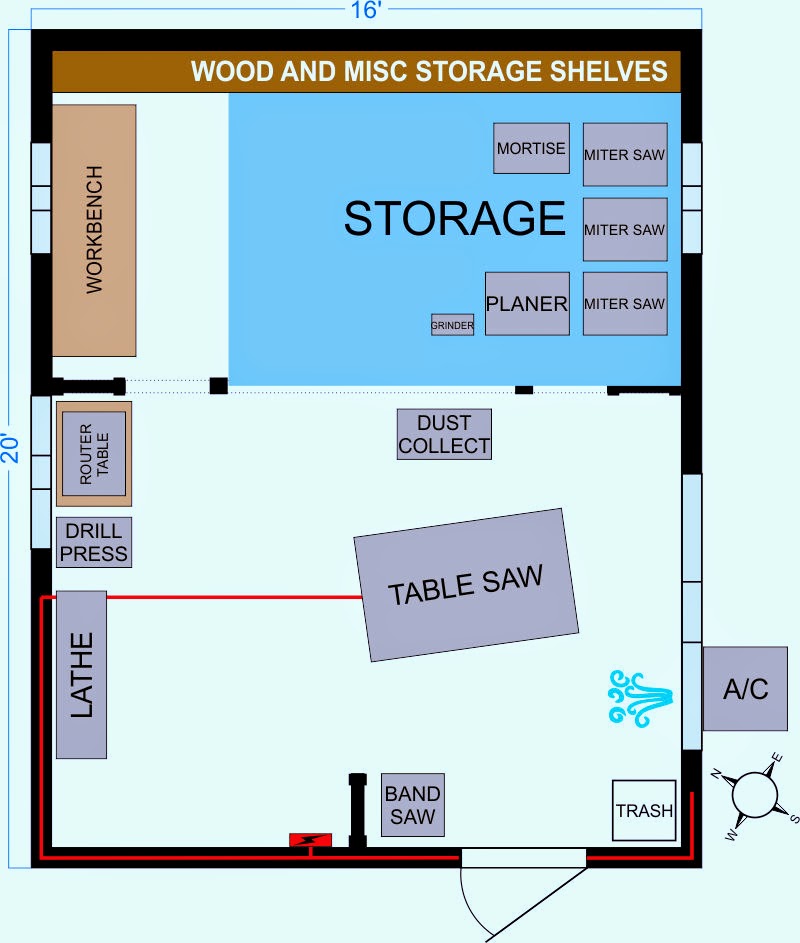 This is where I think I want to be. Anything outside the shop (except A/C) are things without a home. Anything in dashed lines doesn't exist yet but I might build. The red line is where I have electric, eventually it will run to the back half but at the moment there is none back there.

I’m open to suggestions.
Posted by Wood Knack at 11:38 PM No comments:

Email ThisBlogThis!Share to TwitterShare to FacebookShare to Pinterest
Labels: remodel

Shop Remodel #2 - Nails are tougher than they look, removing bench #2

Time for more ripping and tearing. 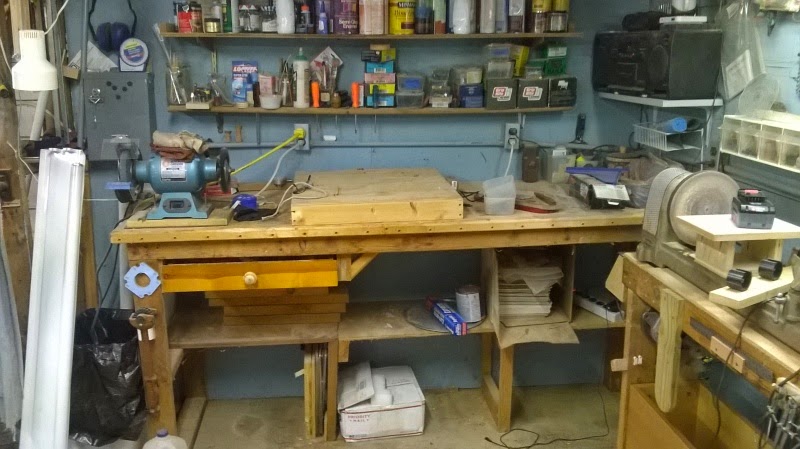 In the upper right of most photos you can make out my black Sony boombox (I think it’s a Sony). Once upon a time I had 3 exactly the same, all scavenged from different places around the same time and cost me nothing. This one is the only one that survives. 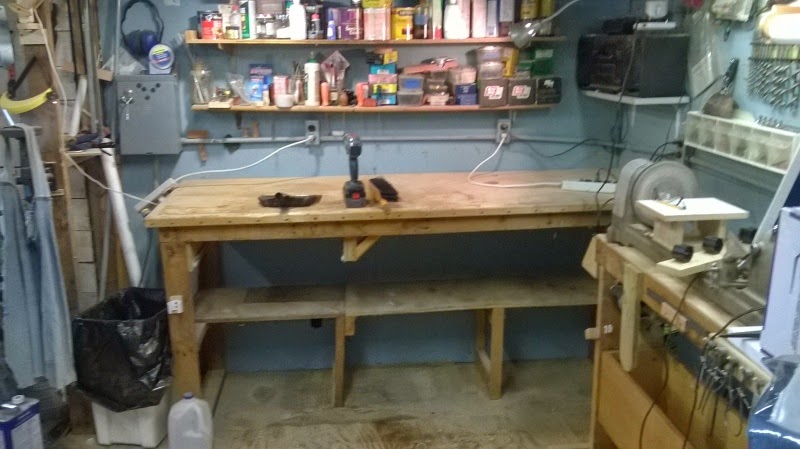 If you’re wondering where I put all that crap, stick around. 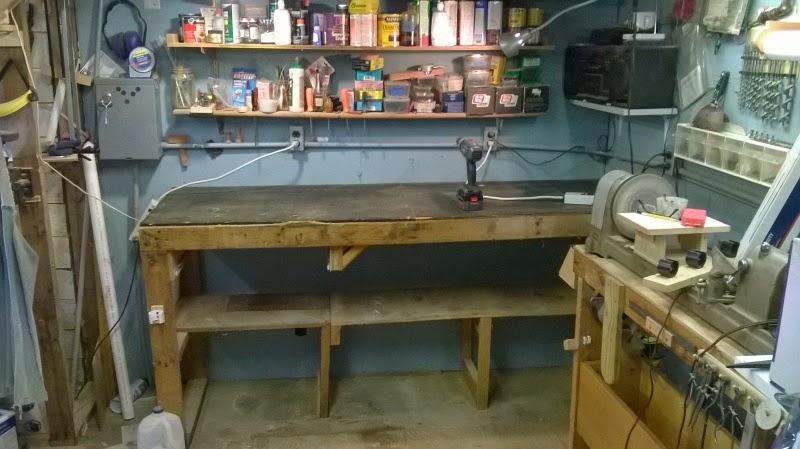 On the shelves above the workbench are finishing supplies, glues, and fasteners. And yes, I use all of it so it has to stay put or find a new home. 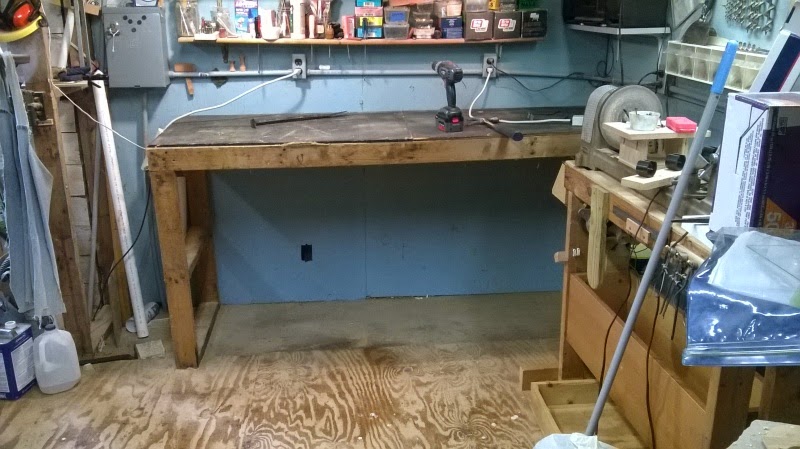 Just to the left in each picture, hangs my blue denim shop apron made for me by my (then) 9 year old daughter. It hangs off a Prairie crank grinder that I will talk more about in a future post. 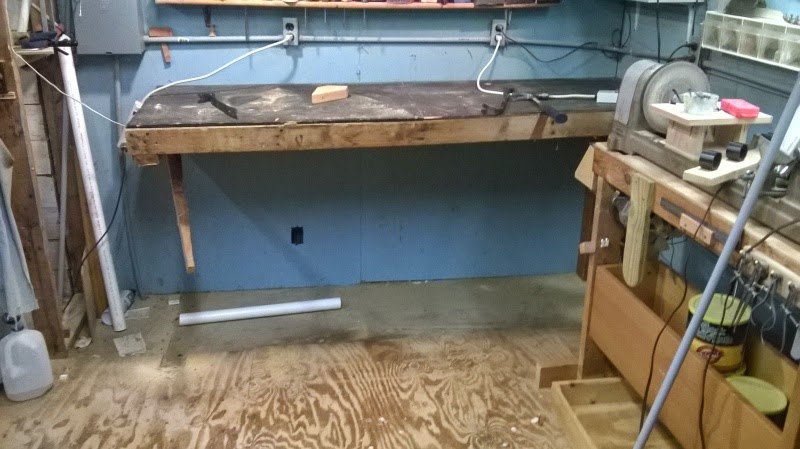 At this point the screws were out and I was down to nails. Whoever built this bench (previous owner) did not want it removed. It was nailed in with a combination of 16p and ringshank nails. Ringshank nails are awesome for holding things together, so awesome they should be never be allowed near 14 year old boys. 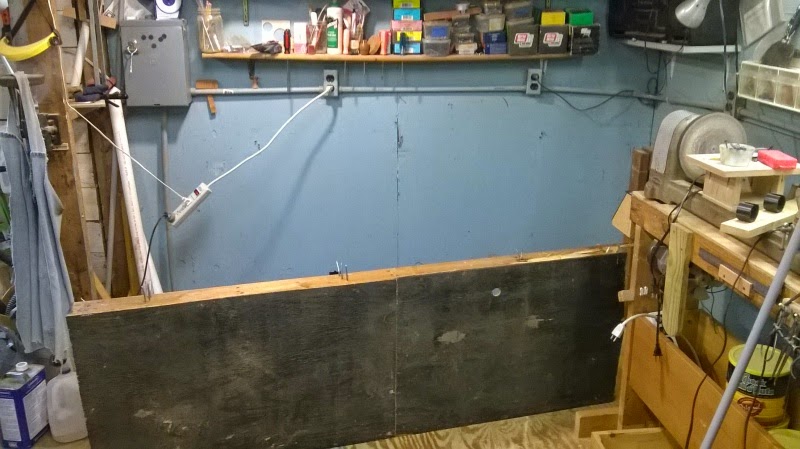 Eventually I gave up prying and busted out the Sawzall. After bouncing on the bench a few times it popped free. 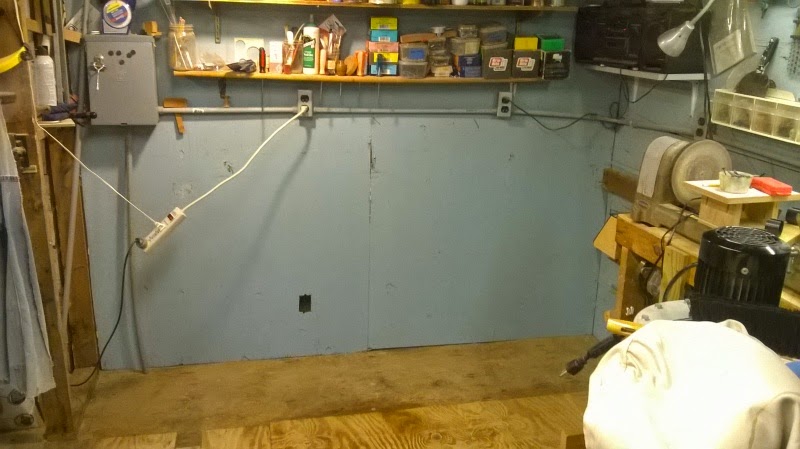 About all that crap that came off the bench—- uh, it’s atop and around my tablesaw. So it will have to be moved so I can patch the floor and build some cabinets. But that’s tomorrow guy’s problem. 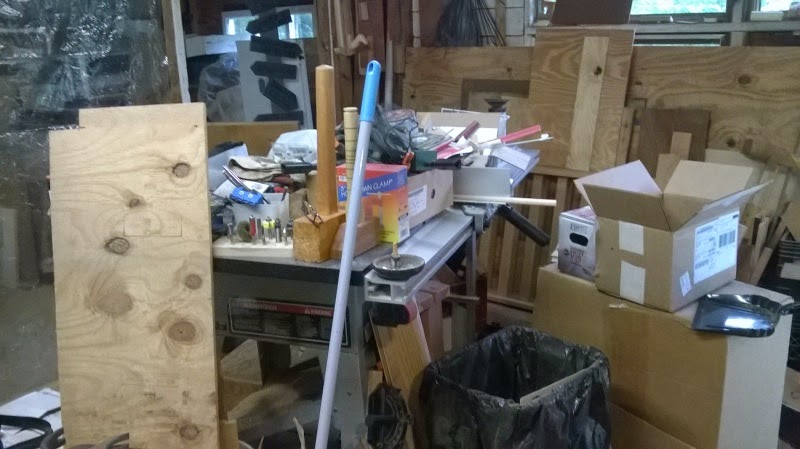 Email ThisBlogThis!Share to TwitterShare to FacebookShare to Pinterest
Labels: remodel

Not a very glamorous project but I took pics for my own benefit so here they are. I've been wanting to rip out this workbench to make room for my lathe. 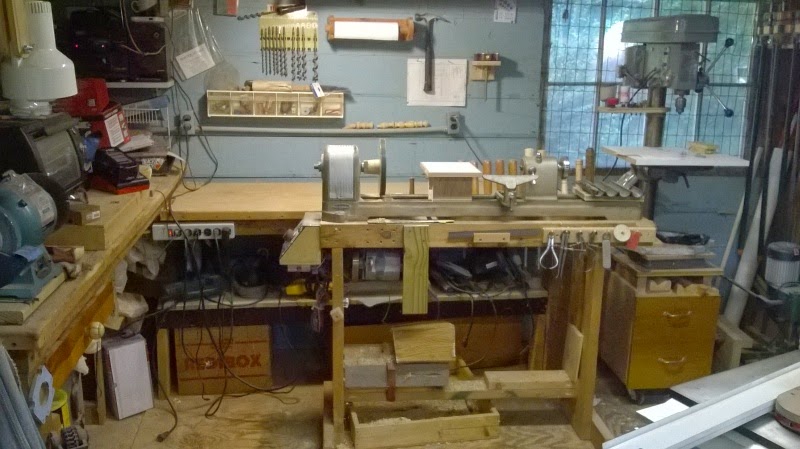 Fun trivia: That paper tacked to the wall under the hammer is a plan I drew for a set of tables made in 1999, it’s been there since. Shop art! 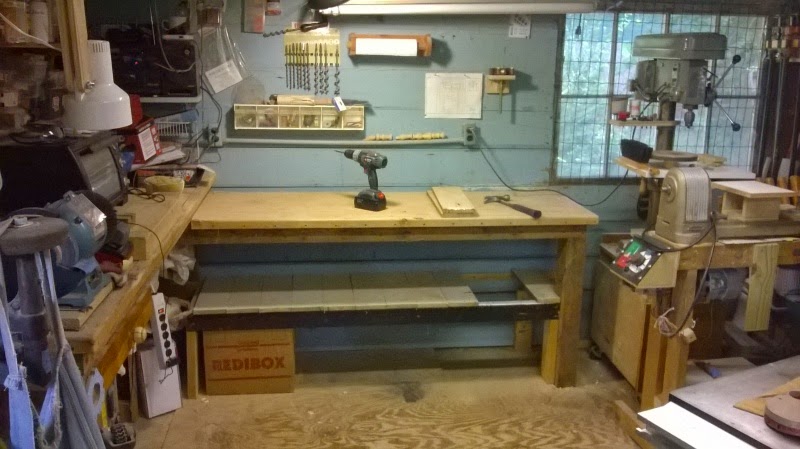 Trivia: the plastic bag hanging askew left of the auger bits has been there about 16 years. It’s a clear mounting plate for a router table. I built a router table without using it. 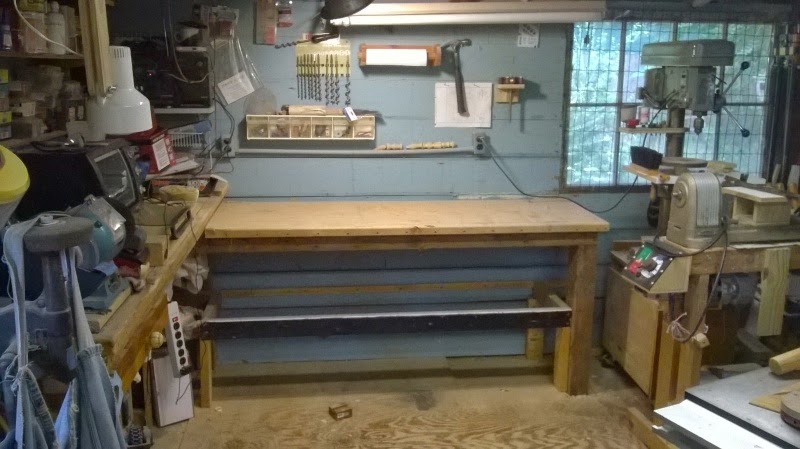 The towel holder was my first ‘shop project’. The sides were shaped using a template originally made for a Halloween napkin holder. 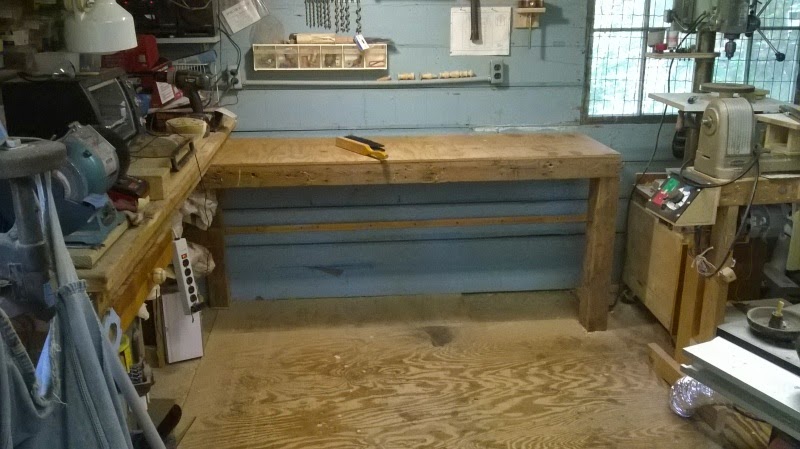 That giant hunk of brass and rosewood is a bad ass marking gauge made by Hammerthumb on LumberJocks. 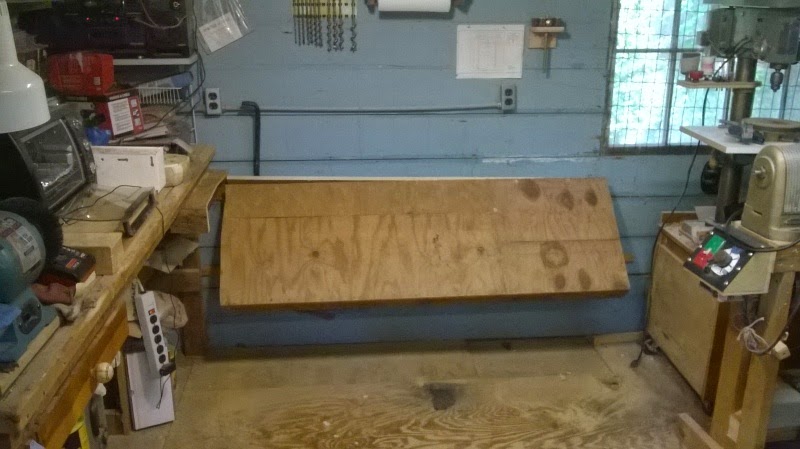 The window has no glass but is covered with 10 mil clear laminate. It was meant to be temporary but worked so well I left it. It has been there almost 17 years. The wire was already there when I moved in. 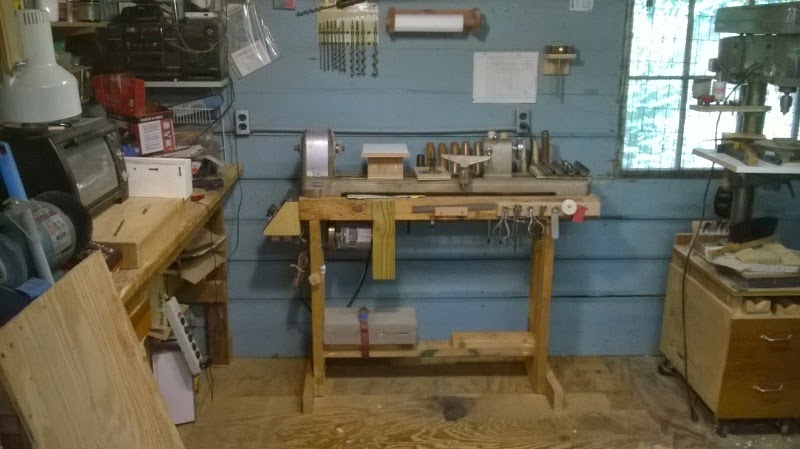 The shop was built by two 14 year old boys, back in the 70’s, from lumber and materials scavenged during the building of the neighborhood. What they lacked in carpentry skills they made up for in ring shank nails. They used one about every 4 inches. To their credit, the building still stands and the roof doesn’t leak.

The concrete block ballast is replaced with a big wood box scavenged from somewhere that happens to fit perfectly. I will turn it on it's side and make drawers to hold all my lathe crap. 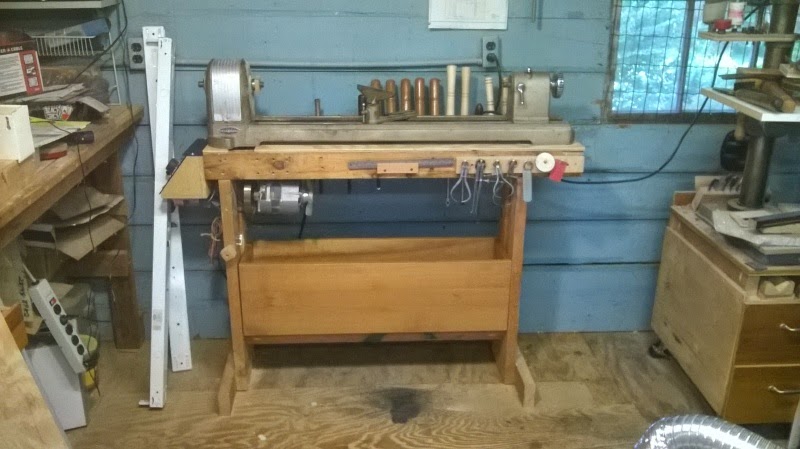 Next I need to rip out the other workbench but first I have to find a home for all the crap on, under, and around it. 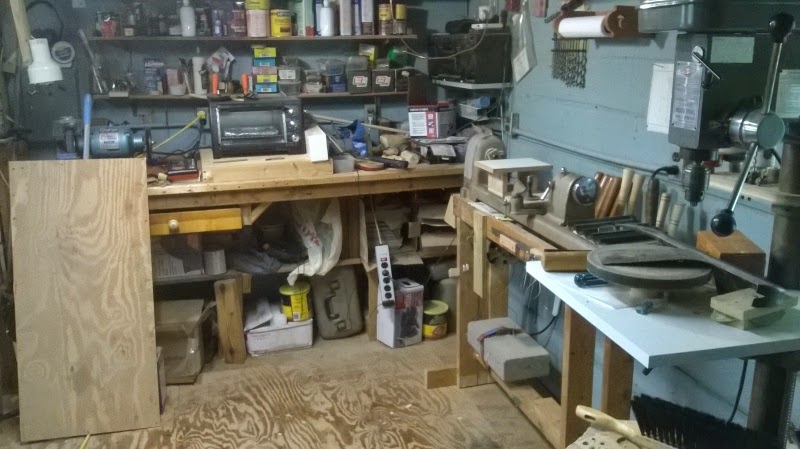